From Board Gaming to Lovecraft and Beyond, Pt. 2

“But I called, as we came near, to one who stood beside the water’s edge, asking him what men did in Astahahn and what their merchandise was, and with whom they traded. He said, ‘Here we have fettered and manacled Time, who would otherwise slay the gods.’ I asked him what gods they worshipped in that city, and he said, ‘All those gods whom Time has not yet slain.'” — “Idle Days on the River Yann,” Lord Dunsany

In case you missed it, click here for Pt. 1 in which I trace the path I followed through board games to Lovecraft fandom. This week, we’re going to follow that rabbit hole a little deeper.

As I’ve mentioned previously, discovering Lovecraft was a doorway into a whole new world of literature for me. Lovecraft steeped himself in an established tradition of supernatural fiction and surrounded himself with other writers who examined similar themes in their own work. Most of you bothering to read this pair of posts probably had at least some prior knowledge of Lovecraft, but you may not be as familiar with his predecessors and contemporaries. There are a couple of writers in particular—one forerunner of and one peer to Lovecraft—who I’ve read and come to appreciate within the last year and who I feel are well worth recommending to the uninitiated.

Two of Lovecraft’s biggest influences were Edgar Allan Poe and Edward John Moreton Drax Plunkett who wrote under the name Lord Dunsany. I’m going to assume Poe needs no introduction. (If you weren’t assigned at least one of his stories—“The Tell-Tale Heart,” “The Pit and the Pendulum,” “The Black Cat,” etc— by the time you finished high school, your lit teachers should have shame heaped upon their heads.) Lord Dunsany is not generally as well known. An author, poet, and playwright during the first half of the twentieth century, Dunsany was a master fantasist. Before Tolkien set the template for modern fantasy with his sublime elves and pointy-hatted wizards and orc hordes and medieval-Europe inspired cultures, the Irish Dunsany was crafting hypnotically captivating high myth. Filled with epic language and originally-conceived pantheons of mysterious gods, his dream-like short fiction reads like some mesmerizing synthesis of Holy Scripture, fairy-tale, selections from the Arabian Nights, and the most arcane pagan legends imaginable. Sometimes his stories resolve like allegory, fable, or parable, sometimes they intimate religio-political commentary, and sometimes they leave one wondering what he was on. His prose is simply enthralling.

Lovecraft’s infatuation with Dunsany’s work is unmistakable, especially in his tales of otherworldly history and journeys through the realms of dream. From the naming conventions he uses in those stories to their quasi-Classical narrative style, Lovecraft’s choices sometimes border on imitation. It’s hard to blame him. The bewitching luster of Dunsany’s fiction has tremendous ability to evoke wonder and spark creativity. Even some of the most popular fantasists working today, artists such as Neil Gaiman and Guillermo del Toro, cite Dunsany as an influence. I can’t recommend him enough. His short fiction is eminently readable (often broken into entries only a few hundred words long), and it will haunt your imagination for days.

Throughout his adult life, Lovecraft corresponded with a wide circle of fellow writers. (In fact, Lovecraft was one of the most prolific epistolarians in history, writing tens of thousands of lengthy letters. It’s been estimated he wrote as many as 100,000, and he died when he was only 46. Do a little math there, and tell me you’re not impressed!) One member of this loose network, Clark Ashton Smith, formed a fifteen year long literary relationship with Lovecraft though the two never met in person. Already a well-established poet (as well as a sculptor and painter later in life), Smith was partially inspired by his friend to experiment with weird fiction and wrote over one hundred short stories before Lovecraft’s death in 1937. The two would occasionally borrow elements from one another’s tales, the mildly unpronounceable name of a forgotten city, forbidden tome, fabled personage, or fearsome deity created by one surreptitiously cropping up in the work of the other. This practice eventually formed a sort of overlapping mythos between their fictional worlds. Indeed, Lovecraft even wrote Smith himself into his fiction in the form of references to the mighty sorcerer Klarkash-Ton.

Despite the similarity of content he shares with Lovecraft, however, Clark Ashton Smith often differs fairly substantially in tone. In the thirty or so of his stories I’ve read at this point, such contrast has presented itself primarily in Smith’s humor. Lovecraft’s wit is often dry and subtle, his focus sharply concentrated on the presentation of his narrative. While many of Smith’s stories are likewise focused, a good portion of them also contain an obvious subtext of wry, sardonic humor. Underlying a bizarre tale of uncanny strangeness, subtle references will either insinuate an amusing secondary narrative or suggest implicit satirical intent. The story of a horrific presence inhabiting an abandoned temple to a primeval god opens with the extended braggadocio of the two washed out thieves who stumble upon it (“The Tale of Satampra Zeiros”). And by the time you finish the chronicle of a despondent human poet who fulfills prophecy on an alien world and wins the heart (or equivalent organ) of a distinctly non-humanoid extraterrestrial princess, you might just wonder if you were actually reading a commentary on political spin and the civilized tolerance of non-traditional romantic pairings. (“The Monster of the Prophecy”—surprisingly timely, that one.)

Perhaps the best thing recommending Smith’s fiction is its sheer variety. Lovecraft’s brand of ancient and cosmic horror is certainly represented, but Smith’s oeuvre is incredibly broad. From gothic mainstays such as sinister hauntings and dark alchemy to secret magical pre-history and pulpy science-fiction adventure stories of extended sojourns on faraway planets or mystifying alien invasions, his stories run the gamut of weird and speculative fiction. As a poet, his handle on language is remarkable, too. His extensive vocabulary and clear, creative visualizations make it a pleasure to engage him. (My favorite line so far: “The darkness was like the slow oozing of a cold, glaucous eternity.”) Personally, I plan to consume his corpus of short fiction in its entirety. If you are at all entertained by horror, fantasy, and/or science fiction, Clark Ashton Smith has a plethora of quality material waiting for you.

My love affair with Arkham Horror not only spurred me toward a new (now primary) hobby, but also exposed me to entirely new dimensions of fiction. That route to Lovecraft’s circle may seem a bit backwards, but I’ll always have Arkham to thank for finally inspiring me to investigate it. As flawed as the game itself is, it was birthed from a wellspring of imagination and metaphor well worth exploring. If you’ve enjoyed playing Arkham Horror but never actually read any Lovecraft, you should start here (The Call of Cthulhu) now. If you haven’t played Arkham Horror or read Lovecraft (i.e., you’re here only because you know me or liked the name of my blog), start there (The Call of Cthulhu) anyway. You won’t regret it. If, on the other hand, Lovecraft seems a tad old hat to you—if you’ve long since heard the whispers in darkness and wandered the mountains of madness—fret not for wonderful new worlds still await you. Check out the links at the end of this entry for great places to get started with Dunsany and CAS. 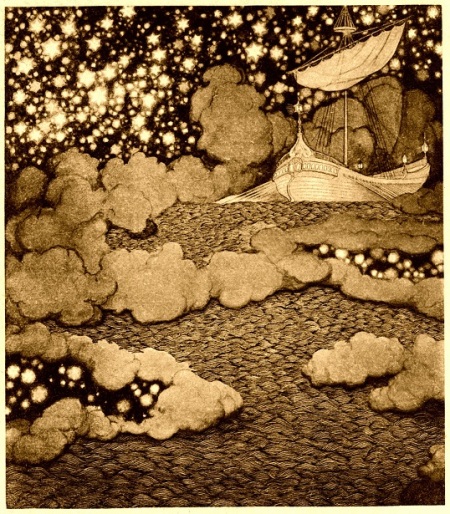 You can find easy access to the text of a number of Dunsany’s books in a variety of formats at Project Gutenberg. Better yet, take a look at his bibliography on Wikipedia, choose a title, then do a quick search of the Internet Archive‘s text database. With a modicum of effort, you can dig up beautiful scans of his books in pdf format and enjoy more gorgeous Sidney Sime illustrations like those above.

If you’re interested in having a look at Clark Ashton Smith’s work, I recommend eldritchdark.com. Not only does it house his short fiction, but it also provides a host of other resources for digging into the life and work of the man.

One thought on “From Board Gaming to Lovecraft and Beyond, Pt. 2”