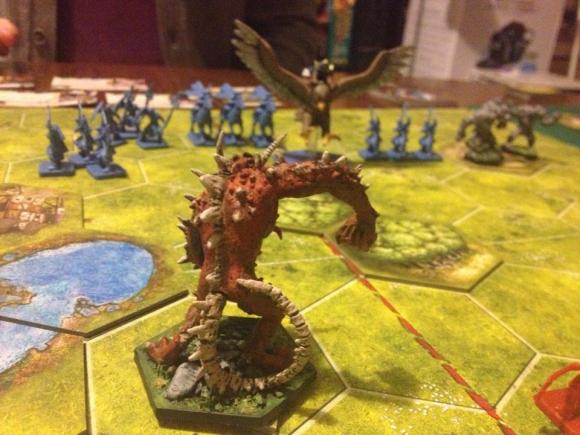 I haven’t done nearly as much board gaming in the past few months as I’d like. As a social hobby that generally requires the participation of people outside oneself, it too often falls victim to fickle adult schedules and/or the nonexistence of friends. That said, of the few instances mine ears hath enjoyed the sweet slap of cardboard on wood veneer in recent weeks, most of them have included the opportunity to try new games. This can be both a great pleasure and a dire gamble for an established connoisseur such as myself. How did my luck fair? Were these novel diversions worth the precious gaming time they depleted? Scroll on, dear reader…

When Paperback rolled out its campaign on Kickstarter, it immediately struck me as one of those concepts I couldn’t believe hadn’t already been done. It seemed like such an obvious idea: combine the currently ubiquitous deck-building mechanics pioneered by Donald Vaccarino’s Dominion with the perennially popular wordplay of mass market titles like Scrabble and Words with Friends (minus the crossword element). The game sees players using their starting decks of Wheel of Fortune consonants (RSTLN) and wild cards to form words for which they earn money. This money is used in turn to purchase additional, more valuable letter cards, some of which also provide special abilities. The ultimate objective is to collect the most victory points by using one’s deck to spell words worth enough money to purchase wild paperback novel cards.

All in all, Paperback succeeds admirably at what it set out to do and takes worthwhile steps toward overcoming the pitfalls seemingly inherent to word games of this sort. Flexible special abilities and the presence of wild cards (worth $0) go a long way toward alleviating the frustration of unlucky draws and unevenly matched opponents. A variety of optional rules and small expansions are included in the box, as well, that provide replayability for reasons apart from the normal sadism/masochism to which word games with the same players so often devolve. As in the games from which it springs, turns can occasionally bog down as players wrack their brains for that perfect play to make the most efficient use of their cards. More than once, I felt that timed turns might add more dynamism to the gameplay experience, but that’s a fix easily applied by those so inclined. Since cards are constantly recycled through one’s deck, I also found the repetition of words remarkably common. That’s not a problem, per se, but it is a symptom of the fact that the game usually rewards strategic card choice over broad vocabulary. Language aficionados who hope to play a second round will likely find this works to their advantage when it comes to wrangling uninclined friends.  I don’t play word games very often, to be honest, but when I do consider them, this one will likely be at the top of my list for the foreseeable future.

A lone figure scurries through patches of gaslight in the chill London fog, hiding the blood on his hands. In the distance, a shrill whistle sounds as his crime is discovered: another working girl, dead in the Whitechapel shadows. The figure tightens his cloak and darts through a nearby alley. With the flat echo of shoes on stone now closing in from every direction, the hunt is on for Jack the Ripper.

Letters from Whitechapel is a semi-cooperative game in which one player takes on the role of the legendary serial killer fleeing from the sites of his murders. Standing in for the investigators on the case, the remaining players attempt to pick up the murderer’s trail and arrest him before he returns to the relative security of his safehouse. The game relies on a straightforward hidden movement mechanic that allows the Ripper player to plot his getaway without revealing his whereabouts to the other players. While the murderer records his movements on a private notepad, the investigators are able to search spaces adjacent to their pawns for clues of his passing. By finding and following the path of the killer’s retreat, they hope ultimately to arrest him before he successfully concludes his fourth night of homicidal abandon.

The investigating players are at an initial disadvantage. The Ripper player receives special movement tokens that allow him to throw them off his scent by moving extra spaces or cutting across city blocks using alleyways. As the game progresses, however, the Ripper begins to feel the pinch. He receives fewer tokens in each round of the game and must continue to use the same safehouse. Thus, his options become much more limited just as the investigators begin to see the patterns in his activity and close in on his hideout.

Letters from Whitechapel is a tense and engaging experience. The investigator players will spend their turns heatedly debating the killer’s possible escape routes or on which of the multiple spaces he just has to be that they should waste the single arrest action each one receives every night. All the while, the Ripper player practices his best poker face, hiding every giddy victory laugh and sigh of relief as the colored pawns pass by his position. The game is expertly distilled to only its most essential elements, and its resulting simplicity is incredibly accessible. Some included optional rules do allow for added spice, but as a child of the American board game tradition, I found myself wishing for a touch more fiddliness on occasion. That, however, is entirely personal preference. The instance I played also felt like it dragged on a bit longer than it needed, but there was an immense amount of lip-flapping between the investigators in our group to blame. As it stands, Letters from Whitechapel is a fantastic option for just about any level of casual or serious gamer (though you may want a cleverer player in the shoes of the Ripper), and I wouldn’t hesitate to give it another go. It fits comfortably in that hallowed class of “gateway” games.

I’d avoided looking into Battlelore 2E for one primary reason: I have no desire to dig another Fantasy Flight Games (FFG) money pit. I’ve managed in the last year to reduce my FFG addiction to only two product lines—namely, Descent 2E and the Lord of the Rings LCG—and that pair alone is earning the gaming giant share enough of my pocket space. Battlelore is undoubtedly destined for a multitude of expansions dripping with expensive plastic minis, and all those dollar signs are the bane of a completist like me. But when a friend who acquired a copy as a gift politely invited me to give it a try, how could I say no?

Battlelore is a tactical skirmish game in which two players in control of opposing fantasy armies vie for victory by completing scenario objectives, controlling strategic locations, and/or eradicating their opponent. I see little point in summarizing the game’s mechanics here. If you’re interested in that side of things, there are somewhere approaching bazillionty-seven other reviews out there that provide all the nitty-gritty at which you can shake a Rune Blade. (Or you can follow my usual and archaic practice of simply reading the rulebook for yourself.) What I will say is that the Command & Colors (C&C) system—best known as the engine behind Days of Wonder’s WWII battle game, Memoir ’44—has aged well, and the facelift it receives in this revision of Battlelore makes it shiny as new. The game is fun, streamlined, and exceptionally easy to pick up.

Okay, well…maybe I’ll talk about just one mechanic. What really sells the game for me (metaphorically, anyway) is the “Command” portion of the C&C system. Each player maintains a small hand of randomly drawn command cards that represent the only actions available to the player on his or her turn. Instead of a wide open, overwhelming free-for-all in which players are at liberty to activate any unit whenever they like, the C&C system focuses a player’s tactical decisions by realistically limiting the options available to him as a commander in the field. Want to charge with your cavalry on the left flank but are only holding cards for the center and right flanks? Tough luck. While the randomness involved in card draws does occasionally lead to frustration, it encourages players to diversify their units and field position in order to take advantage of every opportunity that arises. Essentially, the system forces a player to play sub-optimally by engaging in a sort of tactical improvisation. I find this approach infinitely more accessible and appealing than the dry, often deterministic mind-vs.-mind of abstract strategy or traditional war games.

What’s that you say? The C&C system has been implemented in a number of games? Well, right you are. So what actually sets Battlelore 2E apart from those previous incarnations? As far as I can tell (and in as few words as possible): flexible, player-controlled scenario setups, standardized dice results, and varied yet crystal clear unit stats and abilities. The system’s been polished to a brilliant sheen at this point, and every change that FFG has made is an improvement as far as I can see. The only real negative I can offer is that randomness has the possibility of playing a larger role in the outcome than some players may find comfortable. The rare run of solid bad luck from dice rolls and card draws could conceivably cost a player the game. However, the chances of this occurring, especially on only one side of the board, are extremely slim, and the relatively short play time dulls the sting. If I only spent an hour having my butt unfairly handed to me, I can easily spend the next one wreaking vengeance on my oppressor. 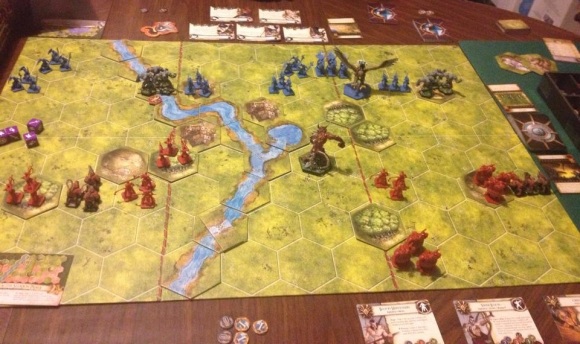 Even with admirable ease of entry rules-wise, the game isn’t for everyone. The imposing price point and fantasy theme will turn off some people. Anyone who considers him- or herself a hobby gamer should at least give it a test drive, though. The game is great. And it’s bound to be huge.

What’s your experience with the games I’ve discussed this week? What other titles have been hitting your table lately? And which ones do you wish hadn’t?