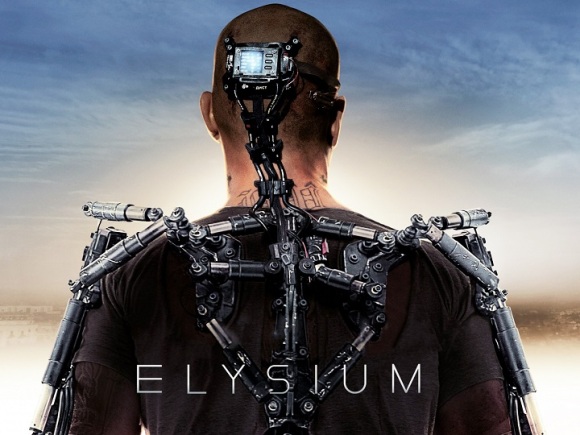 This week, a meek freak ekes by with a bleak, somewhat tongue-in-cheek peek at sleek, badly-tweaked, creaky cinematic chic.

A slick sci-fi concept piece, Elysium left me feeling cold, underwhelmed, and more than a little preached at. Never quite able to completely mask a markedly propagandist slant behind its veneer of action movie tropes, its lack of subtlety shares something in common with Neil Young’s “protest” songs of recent years (e.g., “Let’s Impeach the President”). Director Neill Blomkamp’s previous sermon, District 9, held up because the originality and zaniness of the film’s story transcended its overt political commentary. Elysium has no such fallback because its adaptation of the typical Hollywoodized action hero’s journey fails to inject much freshness into the formula.

Don’t misunderstand me. Film directors and production studios are and should be free to make whatever statements they wish with their movies. This consumer, however, is not generally interested in exploring nuanced and complex social dilemmas such as immigration and healthcare reform through the oversimplified, black & white, us/them lens of a good guy vs. bad guy shoot ’em up. When issues of economic classism are exemplified by an ambitious, anal-retentive aristocrat affecting a (bizarre) faux French accent and questions about the danger of government in bed with the military-industrial complex find their clearest expression in a mentally unstable, hyper-violent mercenary, the film isn’t encouraging conversation so much as hurling polemic.

Elysium doesn’t get it all wrong, though. Its visual polish is striking and creates an iconic world with an efficiency and economy from which other speculative films could learn. In addition, its realistic depiction of the effects of violence on the human body, while gruesome, takes a hesitant step toward undermining the glorification of violence prevalent in this style of film—even if cowboy heroics do still steal the show. If you’re a fan of the Arnold school of straightforward sci-fi actioner, you may get some enjoyment out of Elysium. If, however, you tend to process subtext as you watch, you’re likely to spend more time facepalming than being entertained.

I continue to hope that Chris Nolan’s Interstellar will embody and inspire a return to more thoughtful cinematic science fiction. Hope with me: