Over the next few weeks, I’ll be taking an in depth look at one of the latest and most exciting discoveries I’ve made on the gaming front. I’m admittedly late to the party on this one, but I still felt it warranted special mention. That, and I needed an excuse to share my own gaming story. Regardless of your experience level with games, you’ll find in Fiasco an accessible (and inexpensive) system that all but guarantees many evenings of fun for anyone with a couple of friends and anything approaching a human level of creativity. One disclaimer to start us off, however: this write-up is not a how-to-play guide. While I will be exploring most of the game’s mechanics at a high level, I will not be going out of my way to explain every detail. If you’re interested in the nitty-gritty, pick up a copy of the book or the pdf. I don’t think you’ll regret it.

As much as I love board games, there are certain limits, broadly speaking, to the ways in which they are able to engage me as a player. The hard mechanics—the nuts and bolts of game systems and the interactions between them—appeal to the analytical portions of my brain. Strategy, tactics, and puzzle-solving emerge at this intersection of the rules and my need to prove my superiority. On the other hand, theme and artistic design grant not only aesthetic pleasure, but also a depth of immersion that lends board games an escapist quality similar to movies or books (or, more obviously, video games). If I’m a Lord of the Rings fanboy, laying out the beautiful gameboard for War of the Ring will pull me down a Rhosgobel rabbit hole just as quickly as any sequence from Jackson’s films. Finally, there’s no denying the draw of gaming’s social element. Board games come alive when they’re being played with other people, and there’s not much better in life to my mind than a great game played with great friends. 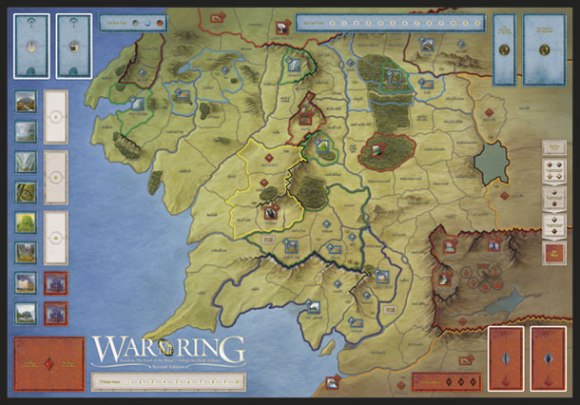 War of the Ring Gameboard

Recently, though, I began feeling an itch the games I was playing couldn’t quite scratch. No matter how much I ground my mental gears while admiring detailed miniatures in the presence of lovely people, something seemed to be missing. I felt an urge to create—not just to build a farm or a colony or a galactic empire—but to truly exercise my creativity in a game. I wanted an experience that would allow me to step outside the bounds of the neatly packaged systems of a board game and to inject my own ideas into the story the game was telling. I wanted freedom to explore my own narrative, my own themes. However, I wasn’t looking to write a short story or pass a flashlight around the campfire. The trajectory and cohesion afforded by game systems remained of critical importance to me. Whatever it was I was jonesing after, it needed to promote creative involvement without completely abandoning “gameyness.”

A traditional tabletop roleplaying game might have seemed the perfect answer to my dilemma if not for two major obstacles. First, most traditional RPGs are structured for extended play. This means an individual game will likely span multiple sittings, requiring a relatively regular group composition and session schedule. Unfortunately, within my current circle of friends, successfully organizing a single game night is something akin to having one’s wildest dreams come true. Even once the calendars are marked, actual attendance of the event won’t be settled until about an hour after we’d planned to start. In this environment, if a game can’t fit into a single evening, there’s little point even attempting it.

Secondly, conventional RPGs can be a lot of work if you’re the gamemaster—as I undoubtedly would have been. The onus is on you to design encounters and characters for the other players to engage, and that takes time; maintaining a consistent game world and constructing involving plots takes even more. While I was looking for a creative outlet (and do tend to be a bit of a control freak when it comes to this hobby), I wasn’t prepared to invest that sort of effort in an endeavor that was (as I’ve indicated above) probably doomed to fail. The game I was seeking, therefore, needed to require little prep time and to allow all the players to participate collaboratively in that set up.

All said, I was asking a lot of this mythical game. I wanted an experience that would satisfy as a tabletop game while being first and foremost an exercise in creativity. Not only that, minimal prep time, collaborative involvement, and play length under about four

hours were absolute requirements. I wasn’t at all confident I’d find a game out there with enough cowbell to cure my fever.

I’d heard the title. A lurker at the edges of the RPG scene, I would’ve been hard pressed to miss it. Fiasco has been almost universally showered with praise and awards since it was published in 2009. However, as someone who enjoys exploring the fluff of RPG settings but who (sadly) never actually plays them, I didn’t think Fiasco had much to offer me. It had no fixed setting, no metaplot, no line of sourcebooks detailing a world whose narrative enthralled me with its possibilities. As far as I could tell from the outside, it was just a book about how to tell stories with your friends. Who needs a game book for that?

Then Wil Wheaton’s fabulous web series Tabletop dedicated two full episodes to a playthrough of Fiasco, and I was blinded by the light of an undeniable revelation: that unassuming little red book contained exactly the game for which I’d been looking.

For those not already familiar and uninterested enough to look elsewhere for more detail, Fiasco is a roleplaying/storytelling game of, according to the book’s tagline, powerful ambition and poor impulse control. Inspired by films like Blood Simple and Fargo, it presents a framework for telling similar stories of “small-time capers gone disastrously wrong.” You and your friends play characters whose likely inept attempts to pursue their misguided goals propel a downward spiral of jealousy, betrayal, violence, and utter mayhem that will almost certainly result in the death and/or maiming of at least one of you—your characters, that is. In fact, if any character manages at least to avoid death, prison, and life-wrecking guilt, you should probably consider that a happy ending. Sound like fun? It is.

The heart of a Fiasco session is the playset. Generally chosen by group consensus from the many available, a playset is comprised of several categorized lists that not only provide an overall impression of the setting in which the story will take place, but also supply the details with which to construct the relationships and needs that will drive the game narrative. During setup, players alternately utilize results from a randomly rolled pool of dice to choose numbered categories and items from the nominated playset. These selections define the links between the characters. Once preparation is complete, each participant will be tied to both the player on his left and the player on his right by a specific relationship that revolves around a specific detail (usually a need, object, or location). For instance, you and your neighbor might be divorced and remarried spouses with a briefcase containing one million dollars in Central American bearer bonds or old cross-town sports rivals who need to get even with all the two-faced bastards who ruined you. The players then extrapolate from this web of connections to determine the particulars of their individual characters: names, personalities, lifestyles, etc.

Not only is setup quick and easy (+/- 20 minutes), it can be half the fun of the game. Brainstorming with friends can lead to really interesting interpretations of often intentionally vague relationship details, and sensing the possibilities for conflict and drama that bubble to the surface during the process keeps everyone engaged and excited. Take the set up for my first game as an example. Three friends and I chose to use the Main Street playset which captures the feeling of “a nice southern town.” The image below displays the relationship details we generated from that playset (as well as the names of the characters we built around them).

As you can see, the language offered by the game is extremely flexible. It left itself wide open for us to determine just what this network of dubious integrity looked like in practice. As details were chosen and placed, we continuously modified our interpretation of the picture they were painting until we arrived at a cohesive understanding of the story in which we found ourselves.

Old friends and good-for nothings Vernon and Amadeus have concocted a brilliant get-rich-quick scheme: they are going to whack old-timer Reverend Cranston and make off with his large stash of drugs and cash. Rev. Cranston? Drugs and cash? Indeed. As a dealer (and casual user), Cranston is making an effort to up his game, and cashflow has increased as a result. Not many people would believe it, but our hoodlums have a unique in. Amadeus has for some time been receiving “counseling” from the good reverend after Sunday service. Cranston has come to trust Amadeus as a loyal customer and potential underling and has revealed his ambitions to the younger man. The one critical detail he has failed to relate, however, is the location of his growing horde. If Vernon and Amadeus can uncover this secret, they will be home free to execute their master plan.

Unfortunately (depending upon your perspective), the entire sordid scenario is complicated, as usual, by a woman. Mary Jane Cranston, firefighter fetishist and beautiful daughter to the reverend, has caught the eye and ear of lovesick Amadeus. He has been captivated by her heavenly voice in the choir during his weekly visits to Peace Haven Church, but he dares not mention his infatuation to Vernon. Not only are Amadeus’ feelings for the girl making him second-guess his murderous intent, but Vernon has a history with her himself. Back when they led the church youth group together, Vernon attempted to seduce Mary Jane—going so far as to garb himself in firefighter gear he had gifted to her—but she rebuffed his advances. Even now, he is unable to illicit more than her annoyance with his continued forceful ploys for affection. If he had any idea of the thoughts running through the mind of his good friend, “Amadigglez,” he just might be compelled to unexpected and violent action.

Like I said, set up can be half the fun.

I’ll continue my examination of Fiasco next week with a closer look at the framework of play and actual game mechanics. I hope to see you there!